(Warning: The following paragraph includes a quite affectionate praise of Apple - feel free to skip to the next paragraph if you are tired about reading about Apple and the iPhone ;) )

Yesterday I finally got the chance to actually see Steve Jobs’ MacWorld Keynote during which he introduced and presented the Apple iPhone (the name is still a controversy) and I’m still amazed at what they’ve managed to create - especially when compared to other related products on the market. In the last years mobile phones have been getting new features and mainly they stopped there. We’d constantly get new features: the ability to play MP3s, video calls, improved browsers, better cameras etc. but little change to the UI or drastic hardware improvements. And ”smartphones” with Symbian seemed such a good idea (wow, would you look at all of the features?) but the excitement would soon disappear after actually trying to use one in real life: these phones are frustratingly slow, practically useless if you want to make a quick call or quickly write a note, and also crash quite often. But manufacturers didn’t seem to care about that - the important thing was to come out with new features! Until… Apple entered the game and reinvented the phone. And they didn’t just try to make a better mobile phone and follow the trends; they presented an innovative new product that focuses on usability! Usability is a key feature that has been neglected for a looong time by other mobile phone manufacturers. Apple iPhone just seems so… simple, yet powerful - just like the iPods. I don’t know about you, but I can really see myself using it in real life, real time. And nobody really saw such iPhone coming. There were many predictions for what was coming, but all included separate products - in general we were waiting for a better iPod with video, a mobile phone, some hoped for a tablet computer etc. - but what Apple did was to combine a set of features and devices into one brilliant product that is years ahread from what’s on the market right now. And it’s clear that they did it for the users.

Ok, so what’s all that got to do with e-learning? Well, I think that the situation in e-learning is in some way similar to the one in the mobile phones market that I’ve just described. We keep adding new technologies - oh! let’s do video conferences! let’s do podcasts! let’s move everything online! etc. - and often ignore what our users (students) really need. They won’t learn better just because we’ll present a topic with the super new technology - it might help, but it might frustrate learners if used in an improper way. We need to think outside the box, try to focus on the learners and be brave and innovative in ways that nobody can yet imagine! I don’t think the winning combination is just adding all the cool technologies that are coming around, but to combine what we have and invent something new in an unique way that will be fun, engaging, effective and that users can relate to. We should try to achieve iLearning (i as intelligent, not just i as internet) for the users and not for our own egos.

And some educators are already doing that by focusing on the learning and not on the technology. And they do that by using technology just as a tool to achieve their goals. But unfortunately, too many people still believe that e-learning means backing up traditional “learning” (I prefer to call that passive transfer of facts) with e-technologies. Just yesterday our faculty received an e-mail from a company (let them remain unnamed) that is offering development of e-learning materials and online courses. I was of course curious to see how they do it and was absolutely shocked to see what it is that they are trying to sell. The first thing that shocked me in their presentation was that they advertised e-learning as a way to lower teaching costs and making teaching easier for the teachers. I definitely don’t think this is the case. E-learning can in fact be more expensive to prepare and it definitely is more demanding for the teachers (well, at least if we want to do it the iLearn way)! Which is definitely a good thing! E-learning shouldn’t be a tool for the lazy teacher, but should be used by teachers that care and want to engage students in learning in different ways. Then, the second thing that almost made me fall off my chair were the unnamed company’s sample “learning” materials. The materials were made in Flash and included a poor PowerPoint-like presentation with cheap graphics and a voice narration by somebody that didn’t really care about what was being said, and no way to pause or navigate through the whole thing. You just have to wait for the thing to play through (did I mention the at least 5 seconds long useless pauses between slides?). I of course gave up after a minute or two. And then I went on to check the sample “online course”, which basically consisted of a series of “learning” materials (created in the manner I already described) that were indexed by chapters. 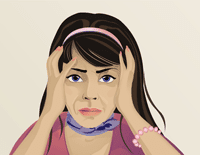 Artwork by ISD Group. More info here.
Had the thing been done by 4th graders, perhaps it could be said the materials were cute, but this was created by a group (not a small one mind you!) of adult “professionals” and they are trying to SELL this as e-learning! That made me a bit angry and also sad because of the thought that some school/faculty might actually buy it because they want to try out the oh-so-popular e-learning.

I know that what we’re trying to do at our faculty is just a little piece of e-learning, but at least we’re trying hard to find new ways (and the focus is on new ways, not new technologies) in e-learning that will not be just a way to advertise how cool we are, but that will actually be relevant to our students. And after seeing that awful example of “e-learning” yesterday I realized that we must try even harder to get closer to iLearning and we must also spread the word about what e-learning really is. Or perhaps we should start using another word for e-learning that isn’t just about passive transfer of facts through electronic channels, but that is is about the learners. Yes, perhaps it isn’t such a bad idea to start using the word E-learning 2.0 (view my previous post on this).

So, I really think that even in the field of (e)learning we can learn something from Apple products that are incredibly focused on its users and pay great attention to usability and tiny details that solve simple problems (example: the MagSafe Power Adapter). And I’d like to conclude this post by following Steve’s example and quoting great hockey player Wayne Gretzky:

“I skate to where the puck in going to be, not where it has been.”
In education there are still too many examples of skating to where the puck was in the previous game. Let’s all try to change that - bit by bit or with great innovative ideas.