Lately, some articles wondered about what had happened to Second Life, the virtual world that had a quite intensive hype period in 2007 and 2008. Usually, these articles follow a similar pattern: a journalists revisits the “lost” virtual world, isn’t really impressed by what he/she sees. The article is then followed by a few comments by average visitors, who tend to agree with the journalist, and then the Second Life community discovers the article and start defending their world with examples of great projects being done in Second Life and sooner or later accuse the journalist of not going to the right places and not taking enough time.


Second Life is a niche

Well, here’s the thing: I did spend a lot of time in Second Life, met many, many wonderful people in there, and I know what great things people are doing there. So I hope I can add my 2 cents into the debate from a fair perspective. If you ask me, SL certainly isn’t dead, and it is in fact doing quite well from a business perspective. But I also think it’s fair to say that it is a niche service. It’s great for content creators, artists, musicians, it’s great for people with enough patience and perseverance to put up with the lag and other technical issues. But it’s awful for the average internet user, and I must confess that I’m also having difficulties with finding reasons to log in other than to read and respond to the occasional message or notice.

Yes, you can attend many wonderful events, see a lot of great art etc.. But only if you are prepared to spend a lot of time troubleshooting various technical problems. Have meetings? Yes, but only with people already using SL. In all these years I haven’t managed to convince a single friend to try out SL, and believe me, I tried!

I think the main problem with Second Life is that it can do almost everything, but that it doesn’t do anything really, really well, but at the same time it has a huge learning curve. On the other hand, a more limited virtual world like World of Warcraft is really good at keeping its users engaged and entertained for hours and hours. No, you can’t have your own house or design your own clothes in there, but nonetheless you have a lot of fun! And I must confess that lately I prefer killing Murlocs in Azeroth (and paying for it!) to waiting for the newest Second Life wonder to load. 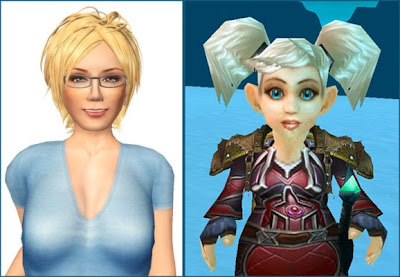 My lil’ gnome mage (right) might not have custom hair or skin like my SL avatar (left), but she’s more fun to hang out with

A lot of potential, but not there yet

Now, don’t get me wrong. I still do believe that virtual worlds have a lot of potential, potential for education, potential for doing business. But I can’t teach if my students have to spend hours just to start feeling comfortable in a new environment, and I can’t do business meetings without having any of my business partners in-world. I would love to do all that, to save all of us the environmental and other costs of travels, but I can’t.

So, while there is a lot of potential, there isn’t a virtual world that fully uses it - at least not for the average user, who isn’t willing to spend hours learning a new piece of software.


Who is going to reinvent virtual worlds?

And that is why I’m still waiting for someone that will be able to reinvent virtual worlds in such a way that it will be easy and nice to have classes in-world or business meetings. And at this point I’m not sure Linden Lab, the makers of Second Life, will be able to pull that off. M Linden is no Steve Jobs. And what we need is an iPhone of virtual worlds. Something that will be so intuitive, so sexy that everyone will want a piece of it.  Something with an awesome user interface that is able to provide a great user experience. That’s the one thing my ideal virtual world should do really, really well.

And while I’m running out of patience for Second Life’s technical woes, I still believe that someday something that reinvents virtual worlds will come along. Perhaps it will be some sort of augmented reality application or something entirely new. I don’t know, but I can wait for the right thing.