Yesterday I came across a blog post on TNW on Subjot, a Twitter alternative. Yeah, I know. At first, I rolled my eyes. (Yet) another Twitter is probably not what we need. But I’m glad I read the post anyway and discovered that Subjot actually offers a solution to a Twitter dilemma I’ve been having lately and builds an interesting product centered around discussion on top of it.

I wouldn’t really call Subjot a Twitter alternative. It actually works quite well with Twitter, and in a way provides a middle way between Twitter and Facebook, providing a public space for discussions based around topics user define themselves. Call me crazy, but I actually see Subjot as Google+ done right. Intrigued? I sure do hope so, because I think Subjot is a nice little gem with a lot of potential and a harbinger of a larger trend. Let me explain why.

The human flaw behind Google+ Circles
Ok, first, let’s get the Google+ elephant out of the room. Here’s a confession: I don’t like Google+. Yes, it’s new, it’s shiny, it has a neat interface, and has the privilege to sit on top of all Google services we love and use often. I was thinking about writing a blog post about Google+, but these two blog posts describe what bothers me about it more eloquently than I could:
It’s not that I think Google+ doesn’t have potential. It sure does. And Google is very serious about it, so I think that’s a rare social Google product we’ll have to learn how to live with. I don’t think it will kill Facebook; in fact, I see it as a closer threat to Twitter. But unless the majority of friends I interact with the most on Twitter and Facebook ditch Twitter/FB in favor of Google+, I really don’t see myself actively using it.

Subjot’s selling point: you get to decide which subjects you want to follow
Now, back to Subjot. The main idea behind Subjot that makes it unique is that we all have different interests we like to talk about. For instance, I’m interested in education, mobile technologies, running and cats, just to name a few subjects.

Now, when a person follows me on Twitter or friends me on Facebook, she will get my updates on all of these subjects. But my dear follow just might be a dog person that doesn’t think my cat is special (gasp!), which might lead her to unfollow/unfriend me because of my annoying cat updates.

Yes, Google+ is built around the idea that you share content only with a circle of friends that will find certain content interesting. The problem is that I don’t always know who out of my friends likes cats. Meaning, some of my friends might end up missing important updates on my awesome cat! (terrible thought, I know)

And this is where Subjot finally comes into the picture: on Subjot, my followers decide which of my subjects they want to follow. Each jot I share has a subject. And if some of my followers are fellow runners, they can follow just the updates about running. If they are interested in social media, they can follow just my updates on social media and ignore all cat posts (although, to be honest, cute cats have always been a big part of social media!).

Subjot subjects are not just (hash)tags
I know what you might be thinking: it’s like using hashtags on Twitter or tagging your blogs posts. Well, yes and no. For one, Twitter doesn’t let you filter your friends’ content by hashtags. If a person you follow tweets excitedly about a conference you’re not attending, your feed gets really noisy and there’s nothing you can do unless you unfollow your friend temporarily (rude, I know!).

And while you can use several hashtags on Twitter and on your blog, Subjot only has one subject per update. And I think that’s brilliant because it keeps the service simple. You don’t have to understand tagging to categorize content on Subjot. Just pick a subject, it’s that easy!

Plus, the user interface for choosing subjects is pretty smart. You are always offered the three most common subjects you use in the form of nice, big buttons, and an autocomplete tool helps you reuse subjects you or your friends have already used.

And you can also Explore popular subjects on Subjot and find users that job about certain subjects to follow. Again, you don’t have to follow everything they post, just the subjects you’re interested in.

Encouraging discussion with comments and notifications
So, is Subjot just Twitter with the ability to categorize content and fine-tune areas of interest you follow? Luckily, no. Twitter is all about fast, instant sharing - and it’s really, really good at that! What it’s not so good at, is keeping track of discussions. You can RT and reply to tweets, of course, but those actions are usually relevant just in that instant.

On the other hand, Subjot borrows two very important features from the Facebook side of the fence: the ability to comment on shared content and notification about other people’s comments. Consequently, Subjot offers a really nice, public space for discussion.

Bridging the gap between Twitter and Facebook with elegant simplicity
Yes, unlike Facebook, where a lot of people choose to have private profiles, Subjot in a public discussion place. Here, again, it comes closer to Twitter, where most sharing is public. So, we can describe Subjot as both as Twitter with better support for discussions or as a public Facebook with asynchronous connections (you don’t have to follow people who follow you). And that’s the beauty of it.

I also like the fact that the creators didn’t try to cram too many features in the service right from the start. For instance, there are yet no “Likes”, reposts, special privacy settings. And in a way that is ok. I think that at this stage, it’s smart to let the users figure out how and what they want to use Subjot for.

What intrigues me about Subjot is that it isn’t really trying to clone any of the big, existing social networks, but it’s providing a fresh, simple, elegant twist on the way we discuss our interests online. Of course, the big challenge for this little gem is attracting enough users that will (hopefully) start forming passionate communities around subjects.

Subjot’s potential as a discussion platform and the question of privacy
And I do think there is a lot of potential for different types of communities to embrace Subjot. For instance, I can see Subjot being used in education, with teachers and students sharing course related content with the ability to follow just that content and not get updates about their teacher’s cooking recipes (unless they want to).

Of course, as we start to imagine such use cases, the question of privacy also emerges and it’s one that Subjot hasn’t addressed yet. For instance, it might be interesting to have the ability to have private subjects and allow followers to view post on those subjects only after approval or upon invitation. 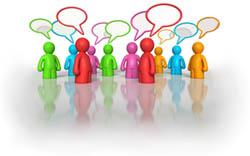 Perhaps there’s also a monetization opportunity in there - go pro and create unlimited private rooms for certain subjects? Ads and sponsored content could also be interesting opportunity for Subjot down the road. But of course, growing the user base and keeping a close eye on how users are using Subjot should be the main priority in the early stages of the product.

The big picture: can the Subjot approach cut down the social networking noise?
I think it’s pretty clear by now that there is something about Subjot that really excites me. I really think Subjot is onto something with this idea of allowing users to follow specific areas of interests when they choose to follow certain people. Of course, we yet have to see how the Subjot approach scales up, but I think a few things are pretty clear by now.

First, we all have different interests we like to talk about, and usually our friends don’t share all our interests with us. Second, there is a need to cut down the noise in social networks. Third, we are not so good at predicting what are friends are interested in and neither are machines (yet). Is the Subjot approach a good solution for all of this? I don’t know, maybe it is.

But I certainly think we’ll start seeing more and more social networks trying to cut down the noise by filtering content based on users’ interests. For instance, just recently, Facebook started experimenting with the aggregation of news feed stories by topic. Isn’t the next logical step in this story ”More about topic X” and “Less about topic Y”? Not to mention the increasing number of iPad news app that are trying to figure out what content you like and serve you a highly personalized selection of content based on your friends and behavior.

We’ll see who does a better job at filtering content - humans (on Subjot or even Google+) or smart algorithms (on Facebook and all those fancy news apps). But it’s certainly something that will be an important competitive advantage in the coming years. After all, I don’t hear anybody complaining about there not being enough content online, but you can hear a lot of complaints about social networks being too noisy and good content hard to find.

Still with me? Good, now give Subjot a try!
Anyhow, thanks for bearing with me through this ridiculously long post. If you did, I do hope you’re now ready to give Subjot a try. If you want to connect with me there, just sign up using this link: http://sjot.it/qwwPUQ. I really do think that Subjot deserves a fair chance, and I’m really interested in seeing the direction and shape it will take in the future.