I know it’s super trendy to be anti-Facebook and looking for more “open” or less “evil” alternatives like Google+ or Diaspora. But after the massive changes announced at Facebook’s f8 developer conference on Thursday, I feel like it’s time I say this out loud: I love Facebook.

Skating to where the puck is going to be

I love Facebook as a service, and I love Facebook as a company. I completely agree with MG Siegler from Techcrunch on this: Facebook is becoming the new Apple, skating to where the puck is going to be, and leaving the competition baffled in dust, miles behind.

Sure, change and innovation are often difficult to accept for the now almost 1 billion strong mainstream Facebook user base. Even a minor repositioning of a button is bound to make someone upset. For a week or so.

And that’s why I have even more respect for Facebook: despite being very mainstream, they are not afraid to innovate. They could easily sit on their asses for a year or two and wait for Google+ or something else to catch up. Instead, they choose to run head first into the questions nobody is even asking yet, and often finding answers nobody else can think of. Like Apple, Facebook is still able to maintain the mentality of a startup and has the guts to challenge the status quo.

Do they get it right every time? No, of course not. But you’re bound to make mistakes if you’re trying hard to be the first and the best in what you do. The tricky part is knowing how to recover from your falls, move on, and find the next big thing that will change people’s lives forever.

This might seem like a big statement; after all, Facebook is just a social network, right? Well, it seems like they have bigger plans than that. The folks at Facebook are really hard at work trying to find the best ways for people to connect online. And not by pilling up features, but by rethinking the way we connect to each other on a human level.

And human is the keyword to the two major changes announced on Thursday. Firstly, completely redesigned user profiles, now called Timelines. And secondly, the new generation of Facebook apps that enable social experiences, and finally make seem the semantic web a step closer to reality. Let me explain why I’m so excited about all these new features.

Timelines: not just a profile, but a collection of memories

Let’s start with Timelines. I think it’s really smart that Facebook decided to give these new profiles a new name. Because it really is a new kind of experience. When the first screenshots were revealed, a lot of people were shouting “My Space!”, but it couldn’t be further from truth. Yes, you do get to choose your own photo to be featured prominently right on top of your Timeline, but what happens below that is… magic.


Facebook will be rolling Timelines to users over the next months; a smart move that will give people more time to adjust and to get used to Timelines by seeing them on their friends’ “profiles”. If you’re a developer or willing to pretend to be one with a little, easy hack, you can already turn on this feature today, but for now only other developers will be able to see your Timeline (once you’re ready to publish it). The rest of Facebook users should start seeing the new Timeliness after September 30.

Of course, I’m always in the front row when it comes to trying out new features, so I already enabled mine. Partially, I am writing this blog post so I can justify the hours I already spent exploring and adding stuff to my timeline ;) I think it’s a beautiful product, and I suspect a lot of people, even those usually reluctant to change, will love it. Because it really feels more human, and establishes emotional connections.

Here are the three key things I like about the Timeline so far: 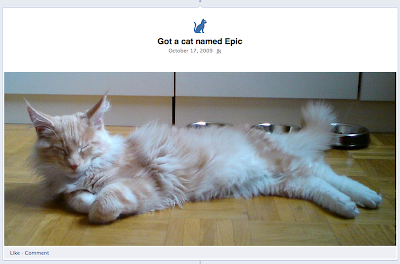 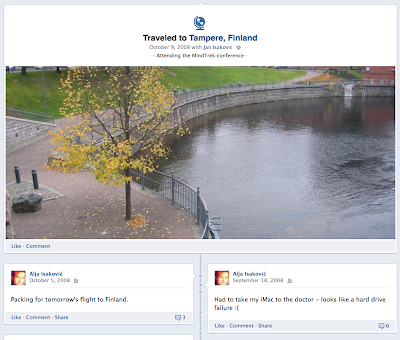 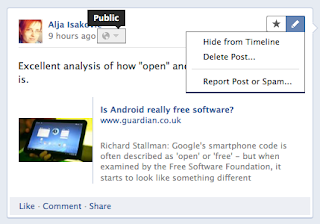 New generation of Facebook apps: social from inside out, kept in check by smart algorithms

Of course, a new generation of profiles also needs great content. That is why Facebook has also announced big changes to their Open Graph protocol “to include other actions and objects created by apps and enabling these apps to integrate deeply into the Facebook experience” (source).

Basically, this will enable users to “read articles”, “cook recipes”, “do homework” and what not, instead of just “liking” Pages. Using Graph Rank, Facebook will make sure to promote stories based on user activity and engagement. The Facebook Developer Blog provides a great explanation of the kind of things Graph Rank can figure out:

“We know people are friends with both their college roommates and their colleagues at work, and those relationships are different. Just because my mom is interested in the movies I am watching doesn’t mean she is interested in my Github checkins. Graph Rank isn’t a global score, but a personalized view of you and your friends’ tastes.”

This is very, very powerful stuff. My initial comment to this announcement was: Welcome to the semantic web, courtesy of Facebook. And I’m sure that announcement had Google engineers biting their nails.

Google is of course great at content, but they suck at relationships. And compared to what Facebook just announced, Google+, their latest pride and joy, looks old and irrelevant. Unless, of course, you’re buying into the whole “Google is open and free” propaganda, in which case I strongly recommend reading the recent Guardian article Is Android really free software?.

The Guardian app: a great example of a new social experience

Speaking of Guardian; I would have probably missed that article if it wasn’t for Guardian’s new Facebook app. It’s a great place to discover popular articles, and the deep social integration makes it easy to see what your friends are reading. At first glance, the fact that your friends see what you’re reading may seem scary, but, once again, you have control over that.

When you first install this new app, you get a review of the sort of content the app might publish, and you get to decided who can see the automatically shared content. You can make it visible to your friends, just your close friends or even just you (the later choice kinda defeats the whole “social reading” concept, but hey! it’s still there if you want it). And, once you’re on a story, and don’t want your friends to see you enjoy reading gossip, you can remove the story from your timeline with just one click.

Of course, if you still feel like that’s too much of an invasion, you don’t have to install the app and keep reading news on the Guardian site on your own, no questions asked. So, the choice is still yours: either you go for the social experience on Facebook or you don’t and keep consuming the content in the way you always did.

Considering the fact that these new features for developers have just been announced, we still have to wait to see the full potential of the new Open Graph. The main thing for me now is the fact that Facebook will be able to filter down the noise from apps much better with these new tools. You won’t see every “like” in the News Feed anymore (the Ticker is now the place for such serendipitous, real-time discovery); instead, your News Feed will focus more on surfacing content that attracts more engagement, which is a great answer to the noise problem.

And I know most users couldn’t care less about things like the Open Graph, Graph Rank and other technical mambo jumbo. What they care about is the end result. And Facebook has really made some great improvements in that aspect in the last few weeks leading to the big f8 we just discussed.

Yeah, yeah, the new Ticker aka stalker box is driving a lot of people insane. Truth be told, it only makes sense when you add the new changes to the app platform to the mix (the addition of “light stories” from apps). But the simplification of privacy controls and Smart Lists are yet another huge thing for Facebook. And while, yet again, people complained when Smart Lists started appearing, I think they’re brilliantly simple and smart.

So simple, in fact, that both my husband and I were rather shocked to notice his mom (whom you couldn’t really describe as tech savvy) posting content to her Family smart list, even though we’ve had a private family group set up for a while now. I don’t like to put too much weight on anecdotal evidence, but if smart lists make more sense to my mom-in-law than the new groups, Facebook apparently is onto something.

And finally, I also love the fact that Facebook now has a Subscribe button, which allows you to follow public updates of people without friending them. Kinda like on Twitter. I generally don’t add people I don’t know in some way or another as my Facebook friends, but I welcome all new subscribers. Actually, this new feature encouraged me to start posting most content as public. After all, it’s the kind of content I’ve already been posting publicly on Twitter; Facebook just allows me to add longer comments.

Facebook as the next big platform: will it make desktop and mobile operating systems irrelevant?

If you’re following rumors on tech blogs, you probably know all of this is just the tip of the iceberg for Facebook. We’re all holding our breaths for the release of Project Spartan, Facebook’s HTML5 app platform that will supposedly support both mobile and desktop browsers. In other words, no need for an app store when you can just launch Facebook.

And, combining recent f8 announcements and what we know about Project Spartan, it’s now easy to see that Facebook is doing something huge. Not just simplifying and humanizing the existing experience, but building the next big platform. And with those kind of plans, it’s not so difficult to imagine a future in which the desktop or mobile operating system is just a pretty frame around the bigger picture on your wall. I certainly think Facebook’s plans are ambitious enough to make Apple nervous. And great competition is always great for innovation.