The past few months have been a crazy roller coaster ride for me. A new job at a cool hardware startup that is trying to improve indoor living (on top of my usual blogging about mobile tech, encouraging Rails Girls, running and what not), and I’ve just returned from the amazing Dublin, where I’ve attended this year’s Digital Agenda Assembly as a member of the Young Advisor Expert Group. As with our previous meeting, the best part of the event was meeting up with other advisors, digital champions, all the amazing people at DG Connect, including the unstoppable Neelie Kroes, Vice-President of the European Commission responsible for the Digital Agenda, and many other wonderful people from across Europe.

You can get an overview of how Europe is moving towards a digital future in the video recording of the main #DA13 keynote speeches. For a quick update, you can also take a look at the Digital Agenda Scoreboard below.

Dear government(s), we are running out of time!

While a lot of indicators are moving in the right direction, it is clear that we have a lot of gaps to fill. At the #da13, I was missing more concrete action plans by EU member states on how exactly are we going to do that. And while Neelie Kroes and her team are doing a great job promoting the necessity of a digital single market in Europe, I was taken aback by how local government representatives still think this is something that shouldn’t be rushed. “What’s the hurry? Let’s take it easy. One thing at a time.”

Seriously? I tell you what the hurry is. We (Europe) are in a big danger of being left behind. While I love the different traditions and cultures in Europe, we cannot afford to stick to the traditional (aka painfully slow) ways of doing things if we want to create a competitive digital market in which new ideas and technologies will flourish.

The public sector needs to embrace the startup mentality. Small, fast moving teams, able to create new services in weeks rather than in months or even years, being allowed to fail and to learn from mistakes. The Gov.uk team of awesome geeks is a great example of this. So why are the others so hesitant in copying this agile and user-centric approach, which has been applauded both by experts and end-users (the citizens)? Look, there’s no need to reinvent the wheel, feel free to copy and adapt the good, proven practices from across Europe. But the time to do this is now, not in a few years!

Europe is full of untapped talent

With only a few exceptions, influential startups like Facebook and Twitter are still being born (or moving) across the ocean, mostly in the sunny California. Yeah, they have the Silicon Valley. And we have the friendly and cheerful Irish people, the hard working Germans (to mention just a few), and a whole bunch of talented people with great ideas all over Europe. We can and should build something even greater by joining forces. “Europe is supposed to be one team,” Harri Koponen of Rovio, reminded us, while proudly wearing an Angry Birds shirt. That’s the key part.

Right now, the advice we all give to consumer tech startups, looking to grow their user base as quickly as possible, is still: go for the US market, launch your service in English. Startups usually don’t have the resources to figure out local regulations and languages of each of the European countries.

Mind you, I’m not saying we should just forget about our local traditions. I do think we can still retain our local character AND tear down the barriers that make absolutely no sense in the digital world. Why am I, as a Slovenian, not able to pay for most of the cool music services our there? Why can’t I get apps that are only available in the UK app store? I won’t be any less Slovenian by having access to great content across Europe. I’ll just be a happier and richer Slovenian, more aware of other cultures.

There are certainly a whole lot of challenges. But also great opportunities once we do decide to embrace Europe as one team, especially in the digital market. Let’s open up the way for the very young, like the 13 years old game maker Jordan Casey; let’s encourage more women to participate on the forefront of the digital revolution; let’s provide better opportunities for tradition to shine in the digital age (for instance, I’ve found the Irish to have great storytelling abilities and an eye for details); let’s get every European online with the tools for creating a better future.

When you start at the bottom, it does often feel like an uphill battle against those at the top that don’t want to change. But the world is changing, whether we want it or not. The questions is just whether we’ll embrace change and lead the charge, or refuse to change and be left behind. From what I’ve seen in Dublin, there are many people in Europe who realize that. But we need to join forces and push for changes together. I am trying to play my own part in this, together with the other young advisors. We’re already brainstorming about what’s the key part of the Digital Agenda for Europe on which we, as a group, could have the greatest impact (suggestions welcome).

So I guess what I am trying to say is this: don’t lose hope as an European, even when faced with people in your government who just “don’t get it”. We’ve seen protests across Europe creating big ripples. Why don’t we also start a digital revolution together? One that would make Europe more agile and ready for constant change? Let’s not limit ourselves to copying the big US trends, we are perfectly capable of creating our own! 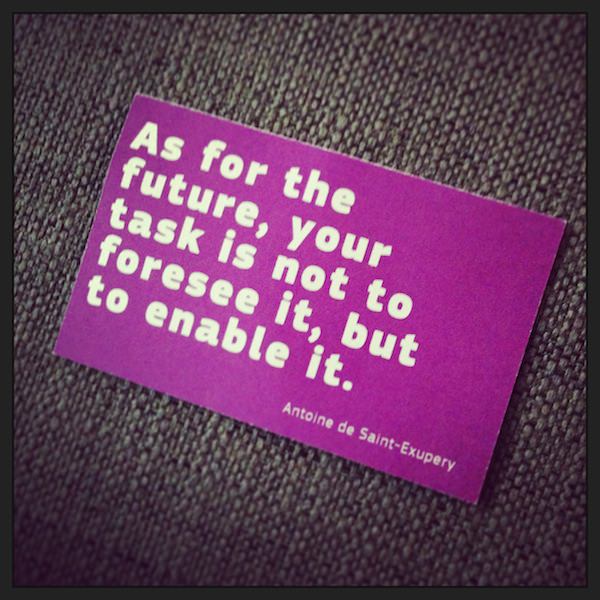