At this year’s Digital Assembly, me and my fellow Neelie Kroes’ Young Advisors were challenged to pick a common theme to work on. One suggestion was to focus on providing every young European with opportunities to start learning coding. Out of this suggestion, Europe Code Week was born over summer.

The key idea is to have one week, November 25 - 30, dedicated to promoting coding all over Europe. By doing this, we hope to put existing initiatives like Rails Girls, CoderDojos and more on the map, spread best practices and encourage more initiatives to be started. The initiative was officially announced three weeks ago by Neelie Kroes on her blog.

The amazing Coding Map of Europe 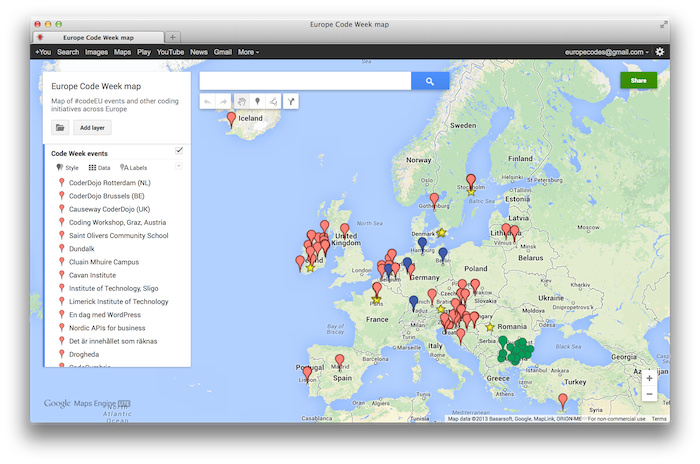 And I must say I’m completely blown away by the response! Especially by what’s going on in Croatia and Ireland, both countries where we have a teacher ambassador. Coincidence? Don’t think so!

In Croatia, Ivana Ružić, an informatics teacher, managed to get over 800 students and teachers involved in 16 #codeEU events all over the country in a very short time. In Ireland, Young Advisor Julie Cullen, rallied up the CoderDojo community and over 200 Irish organization and even managed to promote Code Week at the Web Summit, Europe’s biggest tech conference!

As usually, the media isn’t showing much interest despite the good news we’ve been getting from all over Europe. At the time of writing, we have over 100 initiatives on the Coding Map of Europe. For some reason, a huge number of people volunteering their free time to help others learn new skills that will be essential for our future still isn’t headline worthy. I’m hoping this changes as the events themselves start to unfold.

Yes, it’s true, our little initiative isn’t as big as the Hour of Code on the other side of the ocean. They’ve got the big names, the big sponsors. Which is great! But why can’t we do something similar here in Europe? Right now, Europe Code Week is just a very small group of volunteers, mostly Young Advisors. I hacked the website together over a weekend (it shows!), but we keep getting emails of support from all over the continent. I’m especially happy when we receive emails from people, who are considering starting something new because of Code Week.

One of the first emails was actually from my own country. Mozilla Space in Novo mesto, Slovenia, immediately embraced the initiative and they’ll be hosting their first Mozilla Webmaker workshop during Code Week. The goal of the Webmaker project is to help millions of people move from just using the web to making the web. I was delighted to hear they had to expand the capacity of the workshop due to high demand.

This supports my own experience with organizing Rails Girls workshops in Slovenia. There is in fact an insane amount of demand for digital skills! And while it’s never been easier to learn through websites like Codecademy, Udacity and the rest, it’s much easier, faster and enjoyable to learn in good company among peers.

At the moment, I don’t have the resources to organize another Rails Girls due to everything that is happening with Europe Code Week and an intense startup job on top of it. But I’ve been part of CodeCatz, a small study group for women who want to learn more about programming, since summer. It’s a weekly commitment and so far we’ve learned the basics of Python, started sharing code with GitHub, made our first web apps with Flask, explored the holy trinity of the web (HTML/CSS/JavaScript), and are now moving onto Django with the aim of building an actual project as a team.

Eventually, we’ll do a “lessons learned” review and see how we can grow the movement from a small room hosted each Wednesday by Zemanta onto other chapters and forward. For Europe Code Week, we’ve invited a couple of high school students who are learning about entrepreneurship with the help of Ustvarjalnik to join us. They’ll pitch their business ideas, and we’ll teach them how to use technology to turn those ideas into reality. I bet it’s going to be a fun evening!

This week I also attended my first CoderDojo as a coach. It was great helping kids build their first game. I still remember the few programming lessons I took as a kid. Learning to move the turtle across the screen in Logo. I didn’t take many of these lessons and didn’t grow up to be a programmer, but it certainly helped me to understand computers better and not to be afraid of technology.

And now, more than 20 years after my Logo lessons, I’m finding myself coding again. I don’t work as a developer, probably never will. But with every bit of technology I learn to understand, I get better at my own job, which usually involves a lot of writing in human readable languages.

By understanding technology, I can build a bridge between user requirements and the technical implementation. When I have to write texts for an app or test the user experience, I can now build my own prototype. It’s not pretty or usable in production, but it works and helps me do my job better before anyone else has to write a single line of code. Not to mention I’m also getting better at automating tedious tasks and extracting data when I need it.

What this means is that I don’t expect everyone to become a programmer. But our lives and work are increasingly connected with technology. If you’re a writer, you can use your skills to make apps more human. If you’re a researcher, you need to know how to extract and manage data from various sources. By understanding technology, you can help shape its future.

That is why we should get the whole Europe coding. Technology startups are our future. But we can’t grow without more talent on the market. Not just programmers, but people who understand technology and use it to be better at whatever it is they do.

Now is the time to act!

So, if you can code, at any level, why don’t you share what you know with somebody around you? As we like to say, two is a group already! And if you’ve never done any coding, today is the day to start learning. No matter where you’re coming from, the important thing is to start.

There are two weeks left until Europe Code Week. We still need help to fill in the Coding Map of Europe and spread the word about all the amazing initiatives and events. Will you help us?